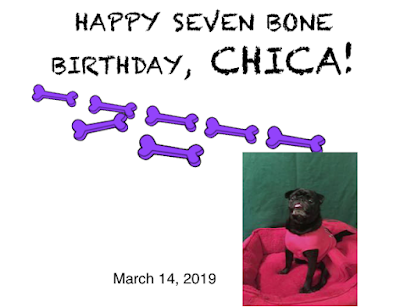 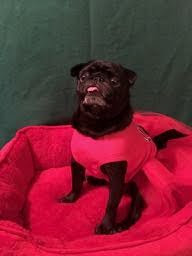 Well, how do I look now that I'm older?  I think I look pretty awesome, doncha think?!

Yeah...I got some silvery chinny chin chin hairs, but I think I earned every one of them! 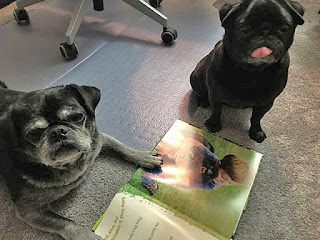 I showed Gus how the kids read to me...and he wasn't too interested.

Gus and I got these lighted jackets for our late evening walks.  Everyone can see us at night, for sure!

Posted by Jazz Girl Pug at 8:52 PM No comments:

In Memory of a Sweet, Shy Pug

Gus here.  You might have seen pictures of an older Satchmo, one of the pugs Guardian had since he was a cute, cute puppy. 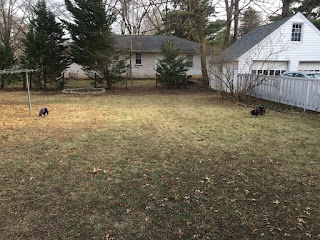 But Satchmo went to live with Guardian's son when we moved into a place that allowed only up to 2 dogs per household.  At that point, Satchmo didn't see or hear well, but he had a big fenced yard where he could roam around without getting hurt. Chica and I would go there to visit him.  We loved to run around without a leash for once.
Then Stefan moved away to go to
school, and there was no place for Satchmo there.  He came to live with us for a few weeks, and by then he could not hear or see.  He was 17 1/2 years old!  We could tell Guardian was upset and sort of stressed when he had been with us a few weeks. 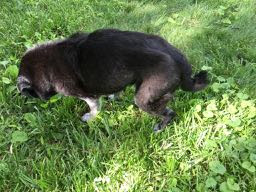 She told her son about that she would have to make other arrangements for his care.  Well, to get to the point--he went to live with a very nice lady who did something called "fostering."  A short time later, that nice person came home from work and Satchmo was very ill.  Guardian told us some of his legs didn't work right and that he was crying a lot because had a lot of pain.  Guardian told us that nice person took him to an animal doctor.  Sadly, that doctor said Satchmo was very, very sick and in pain.  Even sadder, she said that Satchmo died not too long after getting so sick.

Guardian told us that her son blamed her for Satchmo's death.  That was silly of him.We didn't understand that...he was sick and very old and lived with someone else.  How could Guardian have had anything to do with Satchmo's death?

It's taken Guardian a long time to write about Satchmo and help us remember the good times he'd had. So we would like to honor him today. He was very sweet, very shy, and was a Therapy Dog for a short time and visited old people. They loved that he was gentle.  Guardian and other people were so amazed that he lived so long (17 1/2 years is really, really old). 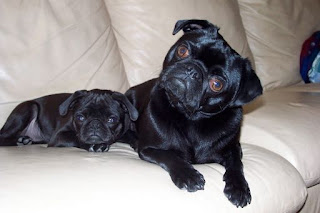 Posted by Jazz Girl Pug at 9:41 PM No comments:

Chica here.  I love children😊I love especially when they read to me.  This year, Guardian has been taking me to one school (something elementary--not sure what that means, but if there are kids there, it's fine with me!).  Guardian said they are seconds...or something like that. Just a little older than me (I'm 6, they are 7-8). But I'll be their age March 14.

Then Guardian just told me another teacher in another elementary school asked for us to come visit her third grade kids.  Wow!  I guess teachers must like me! 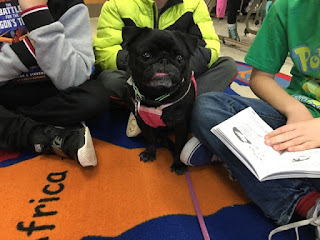 Every time I went into the classrooms, the kids were SO excited--just like me! 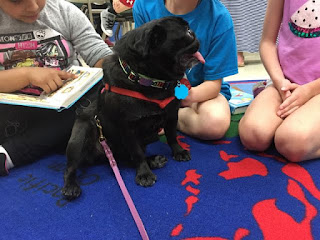 One day we went to one of the schools and instead of going to the classroom, Guardian took me out of the school.  Wait a minute! I thought.  NO KIDS???  I kept pulling toward the school, but it didn't work.

Then, Guardian did something good.  We went to the playground where lots of kids were playing with their big toys.  Guardian found a big person and asked if some of the children could come over and pay attention to me.  Well, who could say no to that face??  Well, after that, Guardian took me on a walk around the neighborhood like we usually do after a visit to this school.

OK Guardian, you did good for me, even if the teacher didn't. But it wasn't the teacher's fault, Guardian said.  That teacher had to check out that the children had learned things they were supposed to learn.  Something called a "test."

Well time for a nap after all those downs and ups!

I'll be back soon! 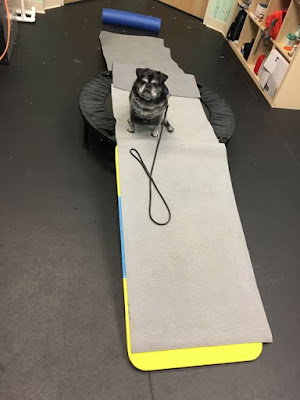 Hi all.  Guardian hasn't been keeping you up with what's happening around here.  You already know I'm a senior pug at age 12, and I have some aches and pains I didn't used to have when I was younger.  Guardian takes me to this place that has me do exercises to help me with pain.
You can see here one of the exercise stations I have. I have to walk up the hill, then stop and sit and then stand a few times, then walk back down. Some things I walk on are soft, some not soft, and some that are harder. 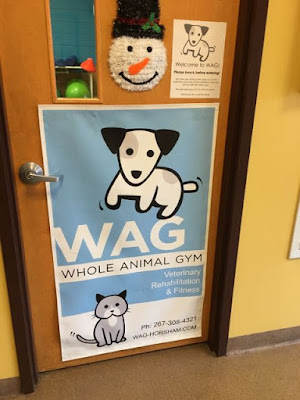 Sometimes the doc puts this light thing on me.  Guardian says it called a "LAY zer" and it's to help make the pain less. But the best thing I do is to walk through warm water on a treadmill thing. 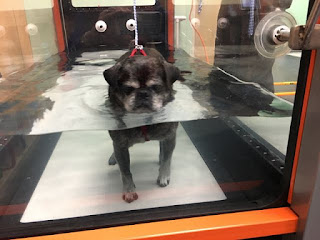 When Guardian tries to explain to other people how the treadmill gets under water, they weren't sure what that meant.  So, here's a picture of me in this nice warm water while the earth moves beneath my feet.  I heard the vet say this was something gentle but also caused me to use my muscles.  I'm told I don't always know where my back feet are, so this helps me find them. 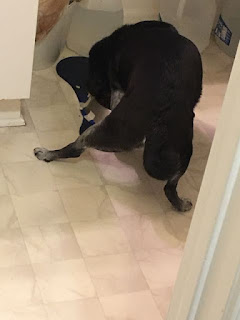 Guardian said I didn't know my back legs did this.  I think WAG is trying to get them not to do this.
What is even better is that Guardian brings my favorite treats, and I get LOTS of them when I do the exercises.

That's the latest from me!
Posted by Jazz Girl Pug at 10:01 AM No comments:

I have a lot more silver hairs now, but Guardian always says it makes me look extinguished...no dis something...whew... distinct?  Yeah, that's it!

I really don't have a lot to say today.  But I do know that Guardian is baking some special cookies now. 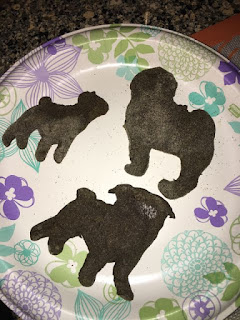 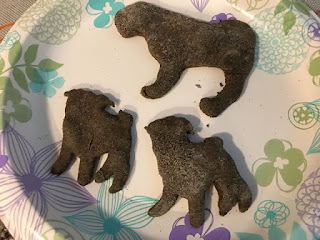 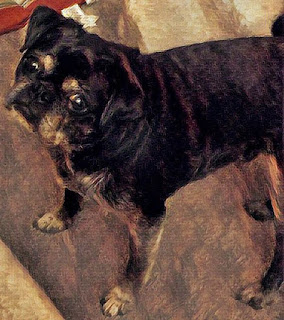 Lately, though, I don't feel so strong.  Guardian took me to see some animal doc people. I got put on some liquidy stuff that helps me feel stronger. And we go to a place called WAG, where they torture me with little needles and some hot light.  I tried to bite the person who was torturing me. She doesn't do those needles anymore.  Now I walk in water while the earth moves beneath my feet. They also had me climb up on something shaky and I had to sit and stand and sit and stand.  I was really tired after my water walk and those other things yesterday. 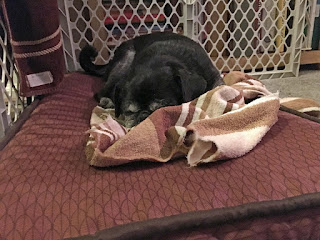 But I did feel strong enough to play with one of my soft toys.  Guardian tries to steal it, but I'm always faster than she is.

Posted by Jazz Girl Pug at 8:01 PM No comments:

I don't look old, do I?  I mean my chinny-chin-chin is getting frosty, but that's all.  Gus's legs and paws are all white and his face is whiter than mine by
a whole lot.

Guardian surprised me with some special pug cookies, though. 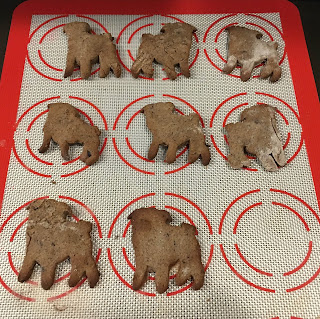 So if you click on this thing right below this, you'll see how much I liked eating them!

[Guardian said if it doesn't go where it's supposed to, get out your scissors (no, Chica, they don't actually cut it!), and cut and paste it (no glue required) wherever it will turn into a short video of me.] 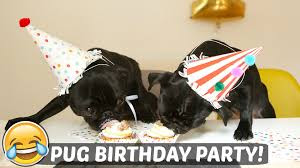 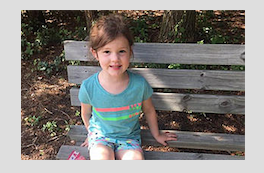 Hi Lena!  We're Gus and Chica, two pugs who love to be read to--just like you like to be read to!
We are registered Therapy Dogs who like to teach kids that reading is FUN!
But we hear you know that already!

Posted by Jazz Girl Pug at 2:36 PM No comments:

Jazz Girl Pug
Jazz was the Girl Pug who inspired this blog. On July 24, 2015, she passed away to our great sadness. She was 12. I am Gus, the Boy Pug, who must fill her paws and carry on with our blog. I will be 12 on October 25, 2018. I still love to chase 'Cuz balls and play with soft toys. Even though Jazz bossed me around, I want to keep the picture with Jazz here. Guardian still has the fingers to write, but she will have to help me with the words. I was used to Jazz saying the most. Guardian remains under the influence of the man-Dog who Whispers. I met him and he whispered to me to stop protecting my food. It worked—sort of. Now there's a new pug invader, Chica. Check her out....bossy, bossy, bossy!